Tennis League
We enter Mens, Ladies and Mixed doubles teams into the West Cumbria Tennis League, and starting in 2018 a singles team as well. Each pair plays the oposition pair for 2 sets with a tie break to 7 in each set if the scores reach 5-5 all.

Matches are played across West Cumbria between April and August usually on a Tuesday evening and sometimes Wednesday and Thursday evenings depending on how many teams are entered. There are 2 pairs in each team for the mens and ladies league and 3 pairs in the mixed league.

The Singles league consistst of 3 players per team, with each player competing against each of the oppostion players in a best of 3 sets format. The scoring system uses a ammended version of the LTA short tennis format, where each set is first to 4 or a tie break at 4 all and the last set is played as a championship tie break to 10.

Match practice
Anyone who is at a competent level and wants to play in the teams is welcome to play in match practice sessions. These are usually scheduled to be a regular weekly time slot but this is determined by the captain for that season. Often 'impromptu' practices are held throughout the year.

When signing up to be come a membmer, please state if you are interested in team tennis or if you are already a member just drop an email to one of the team captains to be included in future sessions. 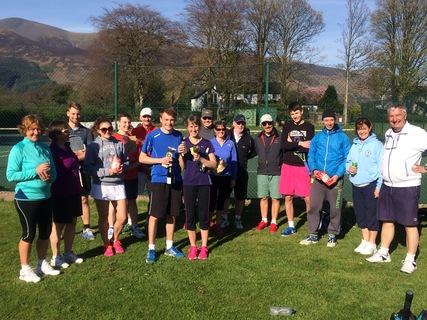 Contact us today if you are interested in finding out more about our club either as a player, official, coach or volunteer.

Use Stripe to make a payment online.

Use this form to make a one-off miscellaneous payment to Keswick & Braithwaite Lawn Tennis Club. Please make sure you enter your full name, details for what the payment is for, plus the amount you are paying (minimum £5.00).

Details of Data Controller are